Peanut is a valuable and important crop which is cultivated almost throughout the world.They  provide smallholder farmers with more than a quarter of their annual agricultural cash income in some Africa country . The peanut must be cracked to obtain peanuts, so it can be further used for extraction of oil and used in food items.

The traditional way of removing peanut from groundnut is to crack it with hand,but when a large amount of nuts have to be work on this method which is consuming time .Peanut shelling in most Africa’s smallholder is predominantly done by hand. While hand shelling can keep low breakage rate of kernel,but it will take much labour and low productivity.also hand shelling puts enormous pressure on farmers.They are not only need shell groundnut before the marketing season ends,but also they need work on harvested fields. It’s necessary for them to use a groundnut decortication machine to help them out from heavy labour working. Victor Farm Machinery has developed a hand operated peanut sheller machine,which is for the farmers in rural areas and in small industries .this manual peanut sheller is a kind of economical and high efficiency machine,it can easily break the groundnut shell without any electrical supply needed. 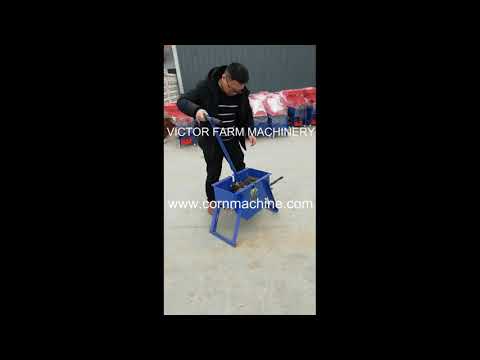